This month’s Observer’s Challenge is (drum roll) M42/M43, the Orion Nebula! You might ask why a deep-sky object that’s easy to find (it’s in the Sword of Orion) and see (it’s bright enough to be viewed with binoculars) would be considered a challenge. 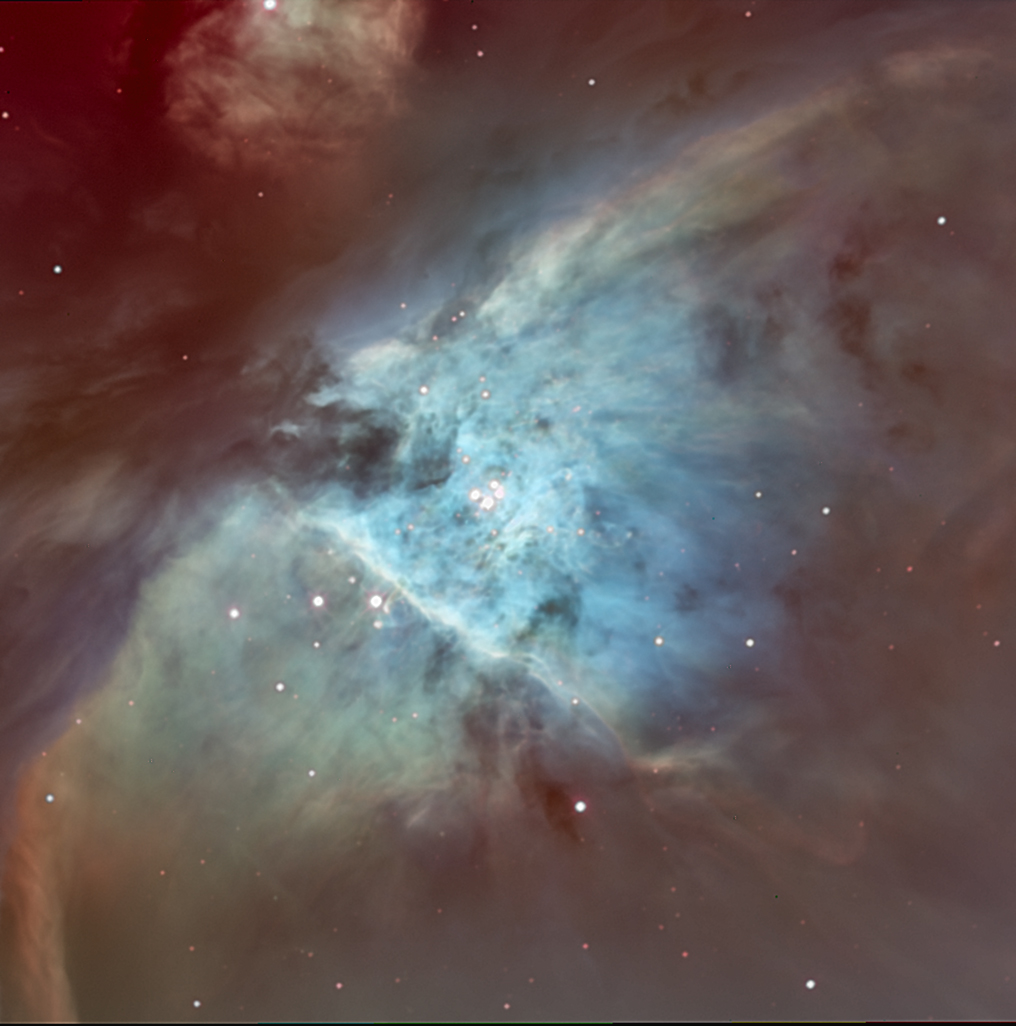 Let’s begin with M42, the brighter of the two. It was discovered in 1610 by the French astronomer Nicolas-Claude Fabri de Peiresc and cataloged by Charles Messier on March 4, 1769. Binoculars and small-aperture telescopes will reveal the bright northeast part of M42, which resembles the outspread wings of a celestial eagle. One challenge is to visually capture the nebula’s faint southerly region. Because M42 spans 85’ by 60’, you’ll want to work with a low-power, wide-field eyepiece. A second visual challenge is to detect M42’s greenish hue. I’ve seen it with a 13.1-inch f/4.5 scope, but not with a 4.5-inch. What is the smallest aperture that will reveal this subtle hue? Find out, and forward your result to Challenge coordinator Roger Ivester.

Fainter and thus overshadowed by M42, M43 eluded detection until reported by Jean-Jacques Dortous de Mairan in 1731. Messier entered it in his catalog on the same date as M42. It is separated from M42 by a dark, dusty lane and surrounds the irregular variable star NU Orionis (magnitude range 6.5 to 7.6). The nebula’s published magnitude of 9.0 might be on the low side, as I’ve seen M43 with a 60mm refractor. Admittedly, it was small and faint, and only visible when I ramped up the magnification to 140X to remove M42 from the field of view. What I saw was a roundish haze surrounding NU Orionis. In larger instruments, M43 will take on a comma shape.

Looking for another challenge? At the heart of M42 is theta-1 (θ1) Orionis, a stunningly beautiful multiple star birthed from the surrounding nebulosity. The four brightest members, all hot and massive O- and B-type stars, form a lop-sided diamond known as the Trapezium. 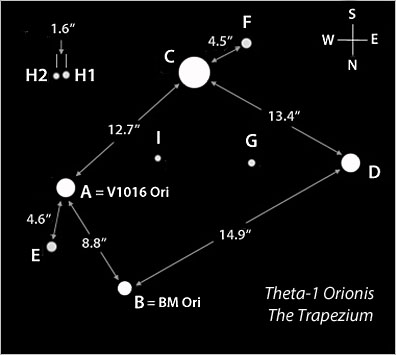 Labeled A to D in order of increasing right ascension, they shine at magnitudes 6.7, 7.9, 5.1, and 6.7, respectively. A and B are eclipsing binaries- the former, bearing the variable star designation V1016 Orionis, fading to magnitude 7.5 every 65.4 days, the latter (BM Orionis) dipping to 8.5 every 6.5 days. Galileo discovered the three brightest members (A, C, and D) in 1617. The fourth (B), was discovered by the French astronomer Jean Picard in 1673. It can be difficult in a small-aperture scope, especially at the low magnification needed to view the entire Orion Nebula. If seeing conditions allow for a magnification of 200X or more, a 6-inch telescope will reveal two more stars – E (magnitude 10.3) and F (magnitude 10.2). Four other members, G, the tight double H1 and H2, and I, are extremely faint at magnitudes 14.5 to 15.5 and require large scopes and optimum seeing conditions. These are a true challenge! 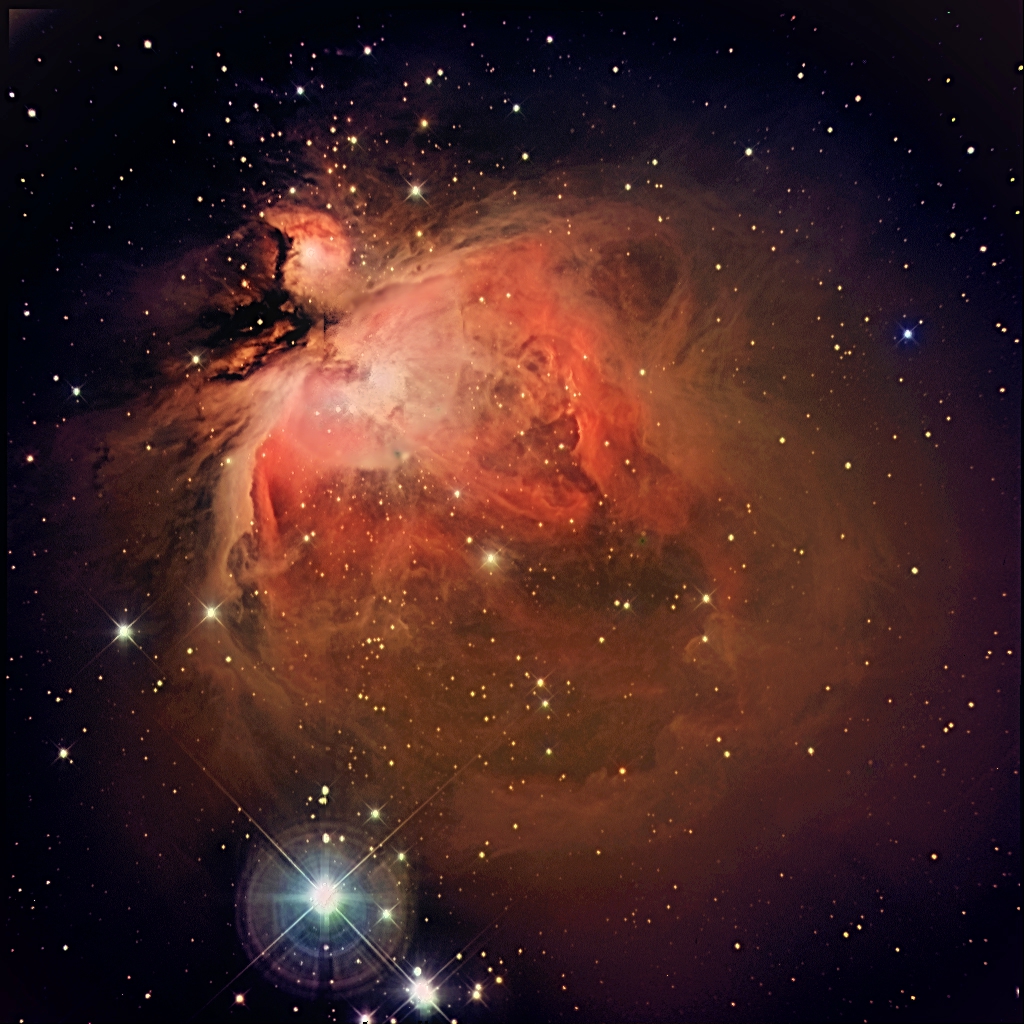 See if you can view the Orion Nebula, its gaseous wreaths embracing a diamond-like clutch of newborn stars, and not feel a sense of awe and wonder. The Orion Nebula lies some 1350 light-years away. Cosmically young, it is just 2 or 3 million years old. The stars in the Trapezium are even younger, perhaps no older than 300,000 years. M42 and M43 have linear diameters 23 and 7.5 light-years, respectively, while the brightest stars in the Trapezium span a distance of about 1.5 light-years.

The purpose of the Observer’s Challenge is to encourage the pursuit of visual observing. It is open to anyone who is interested. If you’d like to contribute notes, drawings, or photographs, we’d be happy to include them in our monthly summary. Submit your observing notes, sketches, and/or images to Roger Ivester (rogerivester@me.com). To find out more about the Observer’s Challenge, log on to http://rogerivester.com/category/observers-challenge-reports-complete.