There are two major reasons why this month’s Observer’s Challenge, the planetary nebula NGC 1501, is largely unobserved. First of all, it’s located in the extremely faint circumpolar constellation Camelopardalis. Star-hoppers will have a rough time navigating around a constellation that lacks stars brighter than 4th magnitude. A second reason has to do with its published magnitude- 13.0 in a number of web sources and observing handbooks. That’s faint enough to scare away anyone observing with a small-aperture scope! But 13.0 is its photographic magnitude. Its visual magnitude is a more accomodating 11.5. 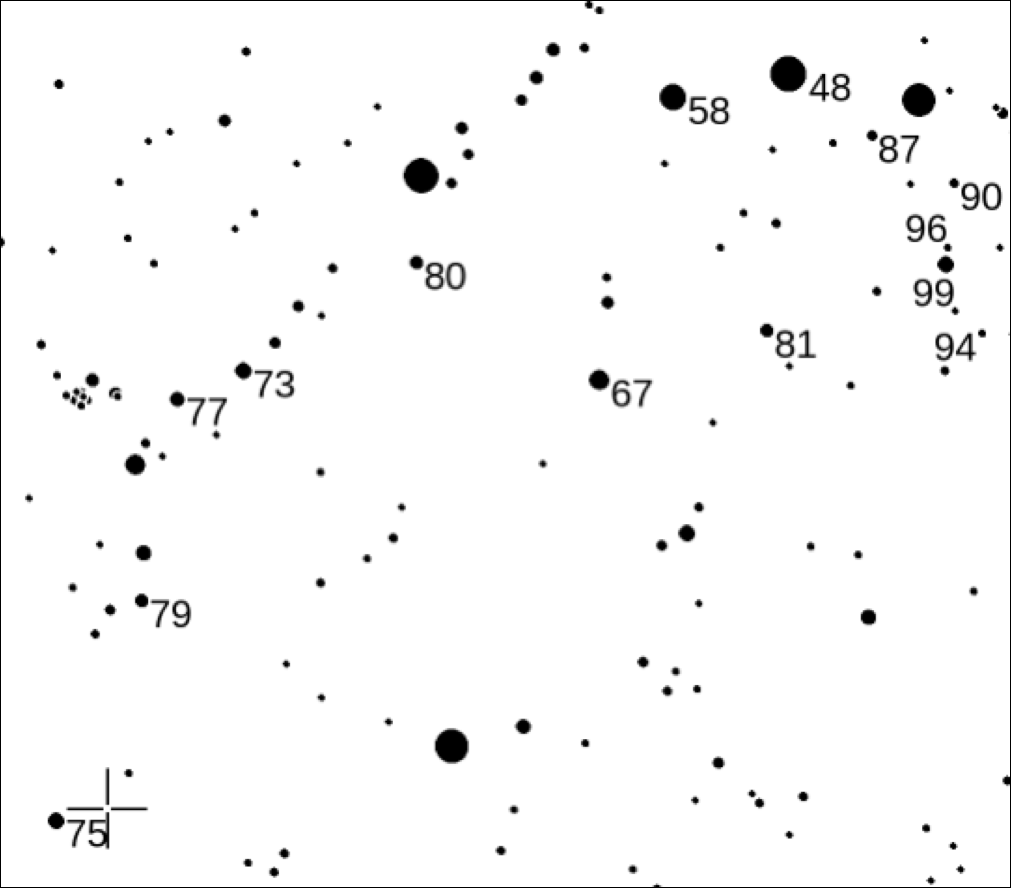 Although NGC 1501 can be viewed with small-aperture scopes under dark-sky conditions, its mottled appearance requires larger instruments. The 14.5-magnitude central star will challenge an 8-inch telescope. Embedded in the surrounding nebulosity like a pearl in a shell, it gives NGC 1501 its nick-name, the Oyster Nebula.

If you own a GoTo scope, you can get to the Oyster by punching in its 2000.0 celestial coordinates: RA 04h 06m 59.4s, DEC +60° 55’ 14.4”. Star-hoppers can begin at nearby Kemble’s Cascade- a remarkable asterism consisting of a 2½ degree-long near-straight chain of some 20 magnitude 7 to 10 stars punctuated near the middle by a 5th magnitude star.

To find the Cascade, make a low-power (25-30X) search of the area marked by a line drawn from beta (β) to epsilon (ε) Cassiopeiae and extended an equal distance beyond (refer to finder Chart A). Once you’ve found it, keep the low power eyepiece in place and take a moment to admire this stunning stellar arrangement. At its southernmost end, you’ll spot a tiny sprinkling of stars. This is the open cluster NGC 1502. A switch to a higher magnification (60-75X will reveal several dozen stars of 9th magnitude and fainter surrounding a pretty double star (Struve 485, magnitudes 6.9 and 6.9, separation 18 arc-seconds).

If you had gone directly to NGC 1502 via GoTo technology, you would have missed an amazing asterism, a neat little star cluster, and an attractive double star. Your final leg of the star-hop takes you 1.4 degrees south of NGC 1502 (refer to Chart B). Once the Oyster comes into view, you’ll want to switch to the highest magnification your telescope and the seeing conditions will allow.

My first encounter with NGC 1501 was via a 3-inch f/10 reflector (Edmund Scientific’s Space Conqueror) on the evening of February 2, 1986. According to the notes I wrote in my logbook it was “very faint, but definitely seen. Visible at 60X.” A sketch made with 120X shows the roundish form I saw. I was surprised to see this planetary at all, as my source gave a magnitude of 13.3, and I estimated it to be more like 11.0.

NGC 1501 was discovered by William Herschel on August 27, 1787. Its estimated distance is around 5000 light years, which translates to an actual dimension of 1.3 light years.

The purpose of the Observer’s Challenge is to encourage the pursuit of visual observing. It is open to anyone who is interested. If you’d like to contribute notes, drawings, or photographs, we’d be happy to include them in our monthly summary. Submit your observing notes, sketches, and/or images to Roger Ivester (rogerivester@me.com). To find out more about the Observer’s Challenge, log on to rogerivester.com/category/observers-challenge-reports-complete,