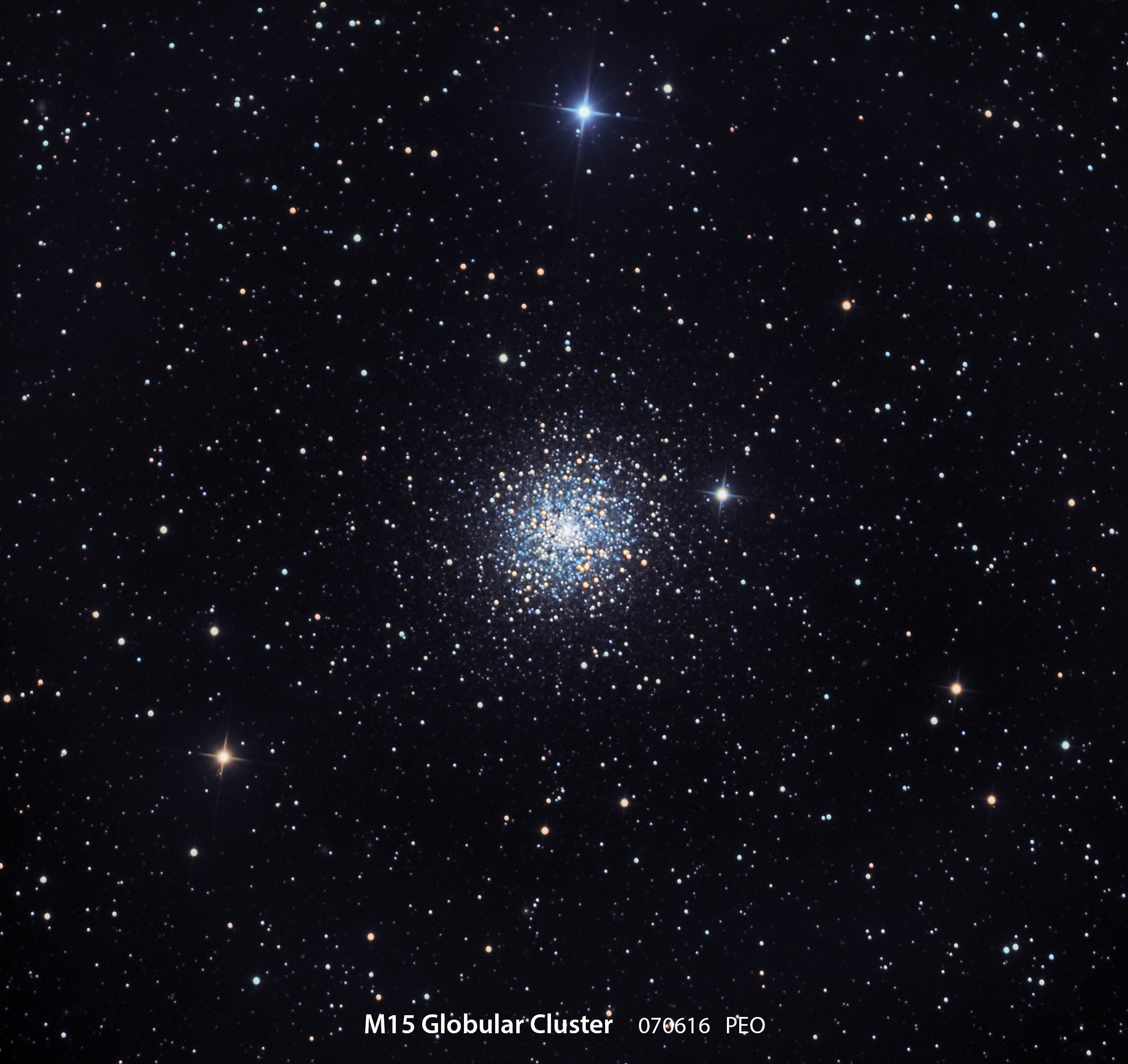 For those of us who are not astronomers, the phrase first light means dawn.   If we are up early to go fishing, hunting, or to search for a missing person, we awake at first light.  For skywatchers, first light has an entirely different meaning.    Instead, it celebrates the first time starlight enters a new telescope or the inside walls of a new observatory.  On Sunday evening, December 15,  David Rossetter, one of the United States’s most famous amateur astronomers, celebrated first light for his new observatory, completed  after he relocated to the Tucson area.  Wendee and I were there, along with some neighbors, friends, and the new executive director of the International Dark Sky Association.

The object David selected as the first thing to be observed from his brand-new observatory was Messier 15, one of the grandest globular star clusters in the entire sky.  It is different from the object I traditionally use for my new telescopes, the planet Jupiter.  Last fall, for example, I pointed Eureka, a brand new telescope, at Jupiter for its first light ceremony.

Jupiter shines at us from about 50 light minutes away, meaning that light reflected from the Sun leaves it and takes about 50 minutes to reach us. The globular cluster Messier 15, is much much farther away. It shines at us from well beyond the stars of its home constellation of Pegasus, from a distance of at least 33,000 light years, and at magnitude 6.2, it is barely visible to the unaided eye on a very dark night.

I was very glad to see M15 using David’s giant 25-inch diameter reflector from his new observatory, for I recall seeing it frequently at our Adirondack Astronomy Retreat. At the first Star Night of the Montreal Centre of the Royal Astronomical Society of Canada, my first one since becoming a member, I was assigned Messier 15, the globular star cluster that was discovered by Jean-Dominique Miraldi in 1746, and added by the comet hunter Charles Messier to his catalogue in 1764.  I recently wrote about that experience in my autobiography:

“At Star Night that September I was assigned to point my telescope at M15, the beautiful globular cluster in Pegasus.  I recall doing my homework about that cluster. I learned that its distance was listed at about 33,000 light years.  We now know that M15 is also one of the oldest globular star clusters in the Milky Way, dating from at least 12 billion years ago.  We also suspect now that the central portion of M15 underwent a collapse of its core deep in the past, and that its central core consists of a huge number of stars orbiting a massive black hole.  Most of this information is more recent.  Back then the pertinent facts were that the cluster had a membership of upwards of a hundred thousand stars.”  (A Nightwatchman’s Journey, p. 68.)

Years later, I wrote: “On a beautiful clear night at one of our Adirondack Astronomy Retreats, I peered through Fritz, David Rossetter’s 25-inch Obsession Dobsonian reflector.  The telescope was pointing at Messier 15 in the Pegasus constellation, but what I had was not just a view.  It was an extended leisurely stroll among the stars of this cluster. I made some left turns, walked up hills, crossed bridges and explored valleys all decked with uncountable stars.”  (A Nightwatchman’s Journey, p. 289.)

I thoroughly enjoyed another look at the beautiful and mysterious Messier 15 from David’s new observatory on that night.  I especially enjoy showing younger people this fabulous cluster of so many stars.  As each new generation is introduced to it, may Messier 15’s myriad stars shine for a distant and newer generation, or from another observatory as it undergoes its first light.